Influence of OET in plants

Institute for Agricultural and Urban Ecological Projects
at the Humboldt University in Berlin Invalidenstraße 42, 10115 Berlin, Germany

Activated water produced with the OET-5 device (activated air) had a tendency to influence adventitious root formation in mung beans and garden cress in a positive manner. This positive effect was demonstrated in test 2 in a statistically significant manner.

Numerous effects resulting from the use activated water are reported. The aim of the tests was to employ biological test methods to investigate whether air activated with the Active Air device and supplied through water can influence adventitious root formation and germination in mung beans (Vigna radiata (L) Wilczek) and garden cress (Lepudium sativum).

Plants
Mung beans and garden cress were selected for examining adventitious root formation. The mung bean (Vigna radiata (L) Wilczek), also known by a variety of other names including green gram and moong bean, is an economically useful plant belonging to the pulse family. Garden cress (Lepidium sativum) is an annual herbaceous plant growing up to 50 centimetres in height.

Substrate
Vermiculite was used as the substrate for the tests with mung beans.

Test 1: After being kept in the dark for 24 hours the mung bean seeds had all begun germinating. No difference in germination rate could be observed between the seeds treated with activated water and those treated with distilled water as all 100 seeds from each group had germinated. 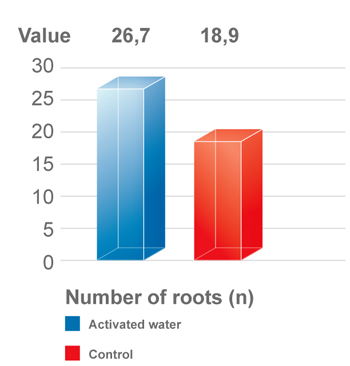